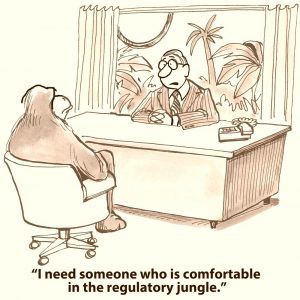 The Food and Drug Administration issued a news release (the Release) today regarding cannabidiol (CBD). The Release was made in the immediate wake of four letters it sent yesterday to prominent retailers of products containing hemp-derived CBD. Although the title of the Release is a little clunky, it fairly sums up its contents: “FDA warns companies marketing unproven products, derived from marijuana, that claim to treat or cure cancer.”

Fortunately, the FDA did not stake out any new or untrodden positions today. The overriding point of the release was to reiterate that a company cannot claim that its products “prevent, diagnose, treat, or cure cancer without evidence to support these outcomes.” Nevermind that there are numerous studies tending to show that cannabinoids have therapeutic, tumor-shrinking, and anti-cancer effects. In fact, as just one example, the National Center for Biotechnology Information, which is part of the United States National Library of Medicine (a branch of the National Institutes of Health) made available a paper called “Cannabidiol as potential anticancer drug”, which contained the following statement: “In 2006 Ligresti et al. [30] demonstrated for the first time that CBD potently and selectively inhibited the growth of different breast tumour cell lines.” (emphasis mine) But this, and other papers and studies like it, are not what the FDA is referring to when it uses the term “evidence”. Rather, it is using that term very specifically to refer to controlled studies conducted under its guidelines that meet its approval. (More recently, it is also referring to “real world evidence”, a bit of a semantic wormhole that you can delve into here and here if you’re so inclined.) This isn’t entirely bad. Generally speaking, it’s good to have a rigorous and standardized system for evaluating the safety and medical efficacy of a product before its released to the public. The problem is that it’s not working in practice, at least with respect to CBD and other cannabinoids.

To get back to the main point, the FDA issued stern official warning letters yesterday to four companies. These letters rebuked the companies for making unlawful therapeutic claims regarding their hemp-derived CBD products and cancer. The letters were sent to Greenroads Health, Natural Alchemist, That’s Natural, and Stanley Brothers Social Enterprises (better known as CW Hemp). The FDA alleged that these companies were unlawfully marketing their products as “drugs” under 21 U.S.C. § 321(g)(1) “because they are intended for use in the diagnosis, cure, mitigation, treatment, or prevention of disease and/or because they are intended to affect the structure or any function of the body.” Of course, none of these companies actually promoted their products as “drugs”. They marketed them as dietary supplements. Unfortunately (and unfairly), the FDA has concluded that “CBD products are excluded from the dietary supplement definition under 21 U.S.C. § 321(ff)(3)(B)(ii)” because “CBD has been authorized for investigation as a new drug for which substantial clinical investigations have been instituted and for which the existence of such investigations has been made public“. The FDA is referring to clinical trials of GW Pharma’s as yet unapproved epilepsy drug, Epidiolex, a “proprietary oral solution of pure plant-derived cannabidiol”. The FDA gave the companies fifteen days to remedy the problems. That’s not much time.

The primary lesson to this story is not to make medical claims about hemp/ CBD products. This sounds simple. Most people I talk with begrudgingly understand this and don’t make affirmative statements about the health benefits of their CBD products. However, simply refraining from making affirmative claims on a website may not be enough. In its letters the FDA made clear that it reviewed the companies’ primary web pages, associated web pages, social media sites, and even customer reviews that the companies published. Does your SEO expert use tags like “sleep aid”, “arthritis”, “migraine”, or other seemingly innocuous words to drive traffic to your website? The FDA will likely consider that to be a violation of the FD&C Act (the Act). Do you quote and post customer reviews that rave about how your products remedy PTSD, anxiety, sleep disorders, etc.? The FDA considers that to be a violation of the Act. If you’ve been thinking of scrubbing your website of these claims, now is the time. Of course, these types of things tend to increase business and promote education, so it’s natural to want to retain as much of them as possible. It’s not a bad idea to consult with your attorney about what’s ok to keep, what must go, and whether some of the verbiage on your website/ social media account can be modified to stay within the bounds of the Act.

So, the FDA lashed out once again and sent warning letters to CBD companies. The last time it did this was almost two years ago, in February 2016. Although those letters dealt with companies who reported CBD concentrations in their products that were inaccurate (highly inaccurate in many cases), the primary thrust was to warn them against making illegal health claims about their products. Today’s news is nothing new, though it’s worth your attention, if only as a reminder that the FDA is poised to be the primary thorn in the CBD industry’s side.

In addition to the main story about medical claims, I’d like to address two more subtle things that stand out to me about the FDA’s letters and Release. First, the FDA consistently, and improperly, refers to “marijuana” in the Release. (“In this case, the illegally sold products allegedly contain cannabidiol (CBD), a component of the marijuana plant that is not FDA approved in any drug product for any indication.” and “Substances that contain components of marijuana will be treated like any other products that make unproven claims to shrink cancer tumors.“) To my knowledge, none of the companies who received warning letters derive their CBD from marijuana. They sell hemp products. The FDA does not once mention the word “hemp” in the Release or its warning letters. However, it repeatedly references “marijuana”.

Under Federal law, “industrial hemp” and “marijuana” are two wholly separate things. From a legal standpoint, the FDA might as well be chiding the companies for using apples when, in fact, they are using oranges. Botany makes little legal difference in this area. The terms “marijuana” and “industrial hemp” have very specific meanings, each with different legal ramifications. These words are what lawyers call “terms of art” because they have precise and specialized legal meanings. The FDA knows this, yet chose to use the improper term “marijuana”, rather than the proper term, “industrial hemp”, in the Release and warning letters. This is not carelessness, but rather a deliberate attempt to blur the distinction between “industrial hemp”, which is Federally legal, and “marijuana”, which is not. To be sure, this is sneaky; however, it belies an underlying uncertainty in its position. If the FDA felt confident in its position regarding CBD- a compound of the cannabis plant that is the subject of numerous studies demonstrating its beneficial effect on a wide array of health issues with no toxicity, psychoactivity, or other adverse responses- then it would not feel the need to blur the distinction between hemp and marijuana. However, since it made a concerted effort to blur those lines it appears to me to be running a smear campaign. In effect, the FDA is guilty of doublespeak. That’s annoying and concerning; however, it also serves as a little window into the FDA’s uncertainty about its legal position.

The second thing I’d like to address is the FDA’s position, taken only in the warning letters and not the Release, that “21 U.S.C. 331(ll) prohibits the introduction into interstate commerce of any food to which CBD has been added.” In other words, the FDA contends that CBD isolate may not be added to food which is sold in interstate commerce because it is “a drug for which substantial clinical investigations have been instituted.” The FDA’s position claiming that CBD is a “drug” is based on somewhat of a bootstrap argument. For this reason, its follow-up position that CBD cannot be added to food because it is a “drug” is a bit circular. Nonetheless, this has been its position for over a year. To date, the FDA has not enforced this position. If it did, it’s difficult to predict what the already volatile CBD isolate market would do. But it’s worth considering.