Shipping cannabis from one legal state to another legal state. Ok, right? 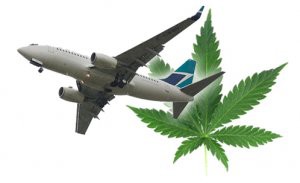 As a cannabis lawyer I have heard, over and over, people tell me that it’s ok to ship or take cannabis from one state where it’s legal (say, Washington) to another state where it’s legal (say, Colorado). The idea makes some logical sense. You take pot from one state where you’re approved to have it, put it on a plane, and ship or deliver it to another state where it’s ok to have it. I’ve even heard people insist that the plane’s high altitude as it passes over non-legal states means that the laws in the states over which it passes don’t apply. This seems to make some sense, too.

So what’s the problem?

The problem is the Feds. Under Federal law, cannabis is a Schedule I drug along with heroin, LSD, mescaline, ecstasy, and even bath salts. This is the highest level of prohibition because, according to the Federal government, the drugs in Schedule I have a “high potential for abuse, no currently accepted medical treatment, and a lack of accepted safety for use of the drug or substance under medical supervision.” Ridiculous, right? Yes. But there cannabis sits, illegal, right there on Schedule I next to these other drugs, some of which are terribly insidious.

Cannabis is illegal under Federal law. And, importantly, it remains illegal under Federal law even in states where it has been legalized. Pretend that the United States government is your parents. Your Dad says, “pot is ok with me.” But your Mother says, “No way.” So, under that scenario, is pot ok in your house? The answer is “sort of.” It means that, if your Dad catches you smoking pot you’re not going to get into trouble. But if your Mom catches you…. you’re grounded.

The US Justice Department issued a memo called the Cole memo stating that, although cannabis remains illegal under Federal law, it won’t use its limited resources to crack down on marijuana users so long as they didn’t trigger certain “enforcement priorities.” In other words, so long as pot users stay out of the Fed’s way, they’re ok. The Cole memo set out several priorities, one of which was: “Preventing the diversion of marijuana from states where it is legal under state law in some form to other states.” Period. It didn’t qualify the statement with, “To states where it is illegal.” It said, “to other states.” For this reason, the Feds will prosecute you if you try to ship or deliver cannabis from Colorado to Washington. Period.

0 comments on “Shipping cannabis from one legal state to another legal state. Ok, right?”Add yours →